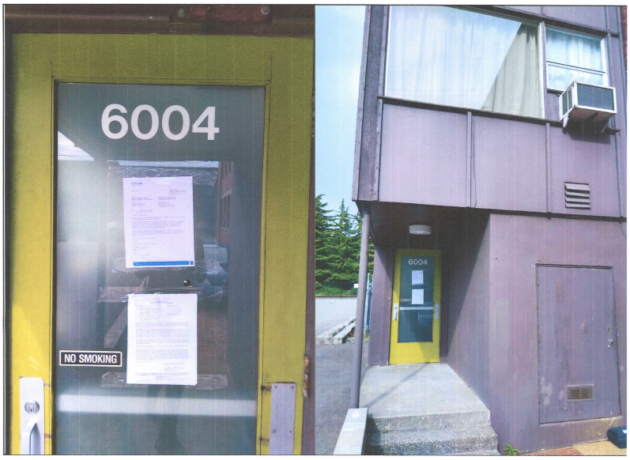 A notice to pay rent or vacate, posted on the door of Magic Leap’s Seattle office on May 4, as shown in court documents. (King County Superior Court Filing)

Magic Leap, the once high-flying augmented reality company that raised more than $2.6 billion in funding before cutting half its workforce last month, is being sued for $52,547 in unpaid rent by the landlord at the iconic Seattle building that housed one of its secretive R&D facilities for the past five years.

The suit was filed against the company on May 15 in King County Superior Court by the owner of the original Rainier Brewery in Seattle’s Georgetown neighborhood. The landlord is seeking to regain possession of the property and collect back rent, plus interest and penalties as allowed under the lease agreement.

As previously reported by GeekWire, a notice filed with the Washington state Employment Security Department said that Magic Leap would close the office, impacting 39 workers beginning June 21. The office has been closed.

It could be a sign of things to come in Seattle tech and real estate, as the economic impact of the COVID-19 pandemic takes hold.

Magic Leap is one of more 130 out-of-town companies that established engineering centers in the region during the economic boom. Many of those companies have paused hiring, and some have started to make cutbacks, at the same time as the region’s homegrown startups are grappling with the turmoil, as well.

Company representatives haven’t yet responded to a request seeking comment on the lawsuit.

Announcing the cutbacks last month, Magic Leap CEO Rony Abovitz said the company was adapting to “new market realities,” and focusing on the potential enterprise market for its augmented reality software and glasses.

“This transformation also means that we must decrease investments in areas where the market has been slower to develop, providing us with a longer runway while retaining the ability to explore and build on future use cases when the market signals readiness,” he wrote in a post at the time.

Bloomberg News reported that about 1,000 employees were let go, or about half of Magic Leap’s workforce.

Magic Leap’s Seattle office was led by Neal Stephenson, the famed science fiction author who became the company’s chief futurist six years ago, along with Brian Schowengerdt, a longtime University of Washington professor who is its chief science and experience officer and co-founder.

The outpost hosted a group called SCEU, short for Self-Contained Existence Unit, a content-focused R&D squad led by Stephenson. It was also home to a developer relations team led by gaming veteran Tadhg Kelly, who left Magic Leap last month, according to his LinkedIn profile.

Seattle has enacted some legal protections against eviction, but the landlord notes in the lawsuit that Magic Leap is “not a ‘small business’ consisting of 50 employees or less per establishment or premises and therefore, is not subject to the City of Seattle’s Moratorium on Small Business Tenant Evictions dated March 17, 2020.”

Court filings show that Magic Leap had about two years remaining under a seven-year lease for a total of more than 10,000 square feet of space across two suites at the historic property. The original Rainier Brewery is not to be confused with the larger and more visible Old Rainier Brewery to the north along Interstate 5.

Continue reading this atricle at https://www.geekwire.com/2020/heavily-funded-magic-leap-sued-seattle-landlord-52k-unpaid-rent/