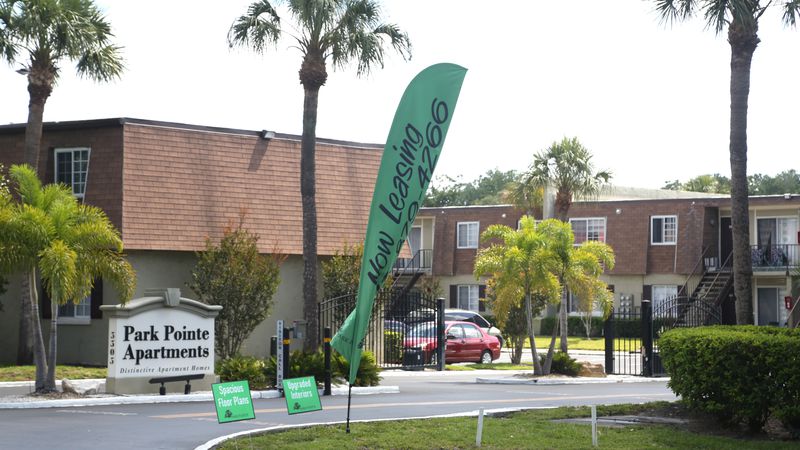 In the seven weeks since Gov. Ron DeSantis issued an executive order to protect people from losing their homes during the coronavirus pandemic, hundreds of eviction cases have stacked up in Florida courts, waiting for the order to lapse.

They include more than 250 in Hillsborough County alone — one of which has Shirley Shumake’s name on it.

A single mother of two girls, she worked as a chef at the USAA Crosstown Center until she was laid off March 12. She still hasn’t received an unemployment check, and she owes $1,800 in rent for her 3-bedroom duplex in Tampa.

When Shumake, 35, was served an eviction notice May 14, It stated she had to pay up or leave by Friday and did not mention DeSantis’ order.

She was resigned to moving until told by a reporter about Florida’s stay on evictions.

“I don’t have anywhere to go or anyone who can help me,” she said. “Not knowing where my kids will sleep tomorrow is really hard for me to deal with.”

Her landlord, Hagai Donat, said he took her to court because she did not respond to his messages about unpaid rent. She contends she never heard from him until the eviction notice.

DeSantis recently extended the stay on evictions until June 2, but even attorneys are unclear what will happen next.

Related: Worried about rent or mortgage payments? Here are some resources to help.

The rush to protect tenants from homelessness has resulted in a confusing patchwork of local, state and federal protections, most of which have little or no legal precedent.

In Hillsborough County, for example, an administrative order allows the Sheriff’s Office not to enforce a writ of possession, the final step of an eviction. But no such protection exists in neighboring Pinellas County, where about 190 evictions have been filed since DeSantis’ order.

Then there is a statewide order issued by Florida Supreme Court Chief Justice Charles Canady. It suspends the requirement to issue writs of possession to county sheriffs through May 29, though in practice it stays in effect as long as DeSantis’ order does.

Muddying the waters further is the federal CARES Act, which prohibits evictions in residential properties that receive government subsidies, such as Section 8, or that have federally backed mortgages — that is, mortgages owned or secured by government entities such as Fannie Mae and Freddie Mac. The CARES Act’s eviction suspension expires July 25.

Lawyers including St. Petersburg attorney Matt Weidner have questioned whether it was legal for landlords to file eviction cases while DeSantis’ executive order is in effect. In some cases, clerks have issued summonses to tenants. In other instances, landlords have filed motions for judgments against renters who didn’t respond quickly enough (those motions have not been granted in cases that fall under DeSantis’ order).

“There’s no question that violates the spirit and the express terms of (the governor’s) order,” said Weidner, who’s representing renters facing eviction. “The order is not intended to allow them to move the ball all the way to the end zone, and the moment it expires, they cross for a touchdown.”

Still, while fighting an eviction at a recent hearing, Weidner said it was difficult to find previous cases to cite — perhaps emblematic of the unprecedented legal terrain created by the pandemic.

“We’re creating this plane as it’s flying,” he said.

Advocates for affordable housing say the economic shutdown will put millions at risk of homelessness. The National Low Income Housing Coalition estimates that at least $100 billion in emergency rental assistance is needed nationwide.

DeSantis has not said he will extend his order.

His spokeswoman, Helen Aguirre Ferré, said that she would provide an update “if an extension is considered.”

With June 2 quickly approaching, the fate of Florida tenants facing eviction may depend on where they live and how their building was paid for.

Chief Judge Ron Ficarrotta on March 18 signed a Hillsborough County order pausing evictions to “protect the public in this time of crisis.” Similar orders were passed in Miami-Dade and Orange counties.

Hillsborough’s stay has no expiration date. But Ficarrotta may follow DeSantis’ lead.

“We’ll look to follow any direction that Tallahassee will give us,” he said.

That would leave the CARES Act as the only reprieve. But it’s difficult to estimate how many rental units that would cover, because eligibility depends on whether landlords have federally backed mortgages or participate in government subsidy programs.

Even data experts have struggled to measure the law’s full impact. An analysis by the University of Florida’s Shimberg Center for Housing Studies found at least 34 percent of the state’s rental units would qualify. But Anne Ray, who manages the center’s housing data clearinghouse, said that percentage is an undercount, because it doesn’t include properties with fewer than five units and federally backed mortgages, for which there is not publicly available data.

She said the federal government should compile a complete list of protected addresses.

“We need to make it easy for renters to find out where they stand,” Ray said.

Tenants and landlords can check their address to see if a property is covered under the CARES Act at www.florida.evictionprotection.org. The nonprofit news site ProPublica created a similar search tool nationwide, as have Fannie Mae and Freddie Mac.

But none are comprehensive, because they exclude that same category of smaller rental properties.

Even if tenants know that they live in a property covered by the CARES Act, they may not be able to afford to use that defense in court. That’s because Florida law requires most tenants to pay the amount of outstanding rent before they can fight an eviction.

“A large percentage of people who should be protected under the CARES Act don’t know or don’t even have a way of raising that defense,” said Alana Greer, co-director of the Community Justice Project, a Miami-based group that provides legal services for low-income clients.

The deadlines for eviction move quickly, with a landlord required to give tenants three days’ notice before filing in court. After they receive the summons, tenants have five days to respond and deposit all unpaid rent into the court registry.

“Obviously, if you could pay anything, you wouldn’t be there in the first place,” Greer said. “Florida is the only state I know of with such harsh tenant laws.”

Other states, such as Michigan, require that landlords certify that their properties do not fall under the CARES Act before filing for eviction, removing that burden from tenants.

Paul Flemming, spokesman for the Office of the State Courts Administrator, said two work groups that have been discussing court operations during the pandemic have raised this topic. They haven’t taken action.

Landlords also are eyeing the coronavirus laws passed by Congress but through a different lens. The CARES Act’s eviction protections threaten the income of anyone who depends on rent. Roughly half of all rental units in the U.S. are owned by individuals, as opposed to large corporations, according to an analysis completed by the U.S. Department of Housing and Urban Development.

Donat, the landlord who filed for eviction against Shumake, said he has taken that step against tenants who did not respond to texts or emails about unpaid rent.

“I had to do something to get their attention,” he said.

He and his brother own about 40 rental properties in the Tampa Bay area. They have given tenants who lost jobs more time to pay and are not charging late fees, he said.

He said the government’s stimulus package should have included specific funds for rent payments rather than giving people a check to spend as they see fit. He said his revenue from renters is down about 10 percent.

“Right now, we are taking a financial hit from people who know they cannot be evicted,” he said.

Other landlords are charging late fees.

In the week after DeSantis ordered his stay, Park Pointe Apartments in Tampa filed eviction notices against five tenants. They had failed to make April rent payments on time, the notices state.

Four of the five tenants contacted by the Times said they were late because they lost work as a result of the pandemic. The fifth could not be reached.

The tenants were charged late fees of $50, plus $5 for every day the rent was late. At least two tenants said they were told to pay an additional $800 to cover court costs and attorney fees.

Attorney Albert Salem III, the attorney for the apartment complex, is also the manager of the company that owns it, state records show.

He did not respond to multiple requests for an interview. A reporter spoke with two employees at the complex’s rental office who said they would pass along a request for comment, but no one called back.

Tenant April Palmer said she contacted the complex’s office after losing her job as an administrator at a fitness studio when the pandemic forced it to close but received “no empathy whatsoever.”

She has since gotten a job delivering groceries but hasn’t earned enough to afford rent. Along with attorney and late fees, she said she owes around $1,800.

“It’s just really stressful,” she said, “you don’t know if you will have a place to live.”

GET THE DAYSTARTER MORNING UPDATE: Sign up to receive the most up-to-date information.

SO YOU WANT TO LEAVE YOUR HOUSE? Read these 10 tips first

DID YOU TEST POSITIVE FOR CORONAVIRUS? A Tampa Bay Times reporter would like to talk to you.

UNEMPLOYMENT Q&A: We answer your questions about Florida unemployment benefits

LISTEN TO THE CORONAVIRUS PODCAST: New episodes every week, including interviews with experts and reporters

HAVE A TIP?: Send us confidential news tips

We’re working hard to bring you the latest news on the coronavirus in Florida. This effort takes a lot of resources to gather and update. If you haven’t already subscribed, please consider buying a print or digital subscription.

Continue reading this atricle at https://www.tampabay.com/news/health/2020/05/23/landlords-lining-up-to-evict-hundreds-of-tampa-bay-tenants-once-moratorium-expires/